I have been wondering who creates these memes. 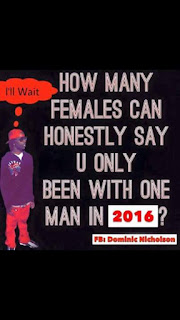 This one recently flowed through my social media news feed accompanied with scathing commentary from a group of women who found the question to be insulting. I agree that it is an annoying question. A form of policing the actions of Black women by a male who has decided that if a woman has had a sexual relationship with more than one man her virtue is questionable.

Who in the hell died and made the author of this meme the guardian, the judge, and the jury about the actions of Black women?

I have often wanted to track down the authors of this type of meme to ask a series of questions that I feel they need to respond to.

I don't see these types of questions being raised to any man in any meme that is currently being circulated in social media. They may exist but there has not been any that has crossed my view.

One of the reasons that I decided to fire back questions to men is the fact that so much emphasis is placed on how many partners Black women have had and not nearly enough emphasis is placed on Black men in the same manner. These are questions that any sexually active adult/teen should be asking period. These questions reflect a reality about the lack of focus on sexual relationships that seems to elude many men.

Why is it necessary to demand that Black women give an accounting while Black men get a pass? To declare your actions as expected because you are a man is not substantial enough to allow you to determine a woman's worth by the number of partners that she decides to have sex with. If there is a standard acceptable number of partners for women, who decided what it is? And why in the hell didn't we have a say in that determination?

I am really tired of the dual standard that has been set for women. We have the right to enjoy a healthy sexual relationship in the manner that we deem to be okay. Because quite frankly, there are men who make it a mission to have sexual relationships with women who are willing without ever asking any damn questions because they want to sexually satisfied.

Coming from the generation of women who started advocating for sexual liberation and use of birth control,  it is time that a real conversation be had about women and how we are going to be sexual that excludes the notion that we are less than wholesome if we have a sexual her story.

Stop with the policing and condemnation of Black women because we decide to engage in a layered sex life.

Posted by msladyDeborah at 6:28 PM